The challenge of the project can be summarized with the following bullet points:
• TProgram the specified MCU.
• Communicate with the MCU using a defined protocol.
• Verify the functionality of the display and 25 leds
• Simulate different High Power AC current signals
• Check voltages and currents

The main challenge of this project was to deal with a very complex PCBA for a Power analyzer. Some instruments were needed to perform the FCT test of the product, and thanks to fastATE® Technology, we could integrate all the needed instruments to perform the test into a 6TL22.

To test and multiplex DC and AC signals, NI-PCI4065DMM, NI VirtualBech 8012 and YAV904X8 were used. To verify the switches, 1 pneumatic YAV90PNE module connected to the proper actuators was included.

For the microcontroller firmware programming, the end customer specified a dedicated Dataman programmer. To avoid potential speed loss and guaranteeing the best signal, we decided to integrate the programming device into the fixture.

All the communication between the platform and the UUT was done using a TTL-RS232 device, allowing the system to enter in test mode to verify several functionalities.

The most critical part was to generate High Power AC current signals. A custom box was designed to transform all them to the desired values. These signals were connected to the DUT using The YAV90132.

Another critical point was to verify the correct functionality of the LEDs and the display. The board had several components at a different height, hindering the camera focus. To solve this problem, a mechanical structure was designed. A fiber optic cable was placed pointing each led and used to move all them to a single plane inside that structure. Also with the help of a mirror, the camera was able to acquire the LEDs and the display in a single image.

TestStand from National instruments was used to develop the test sequence and automate the test. 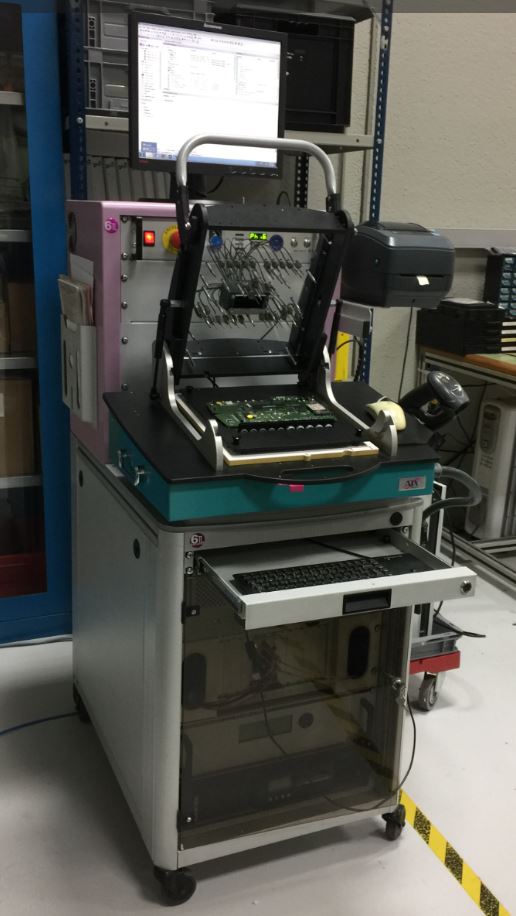 The PCBA and all the functionalities were tested and verified. FastATE® Technology allowed us to create a very compact and modular solution, to measure and power all the parts of the UUT. Also, all the complex and customized parts that we designed were simplified thanks to the use of FastATE modules.

Moreover, although the UUT was improved/modified during the fixture development, thanks to the flexibility of our technology, we could add all the modifications without increasing the hardware cost.